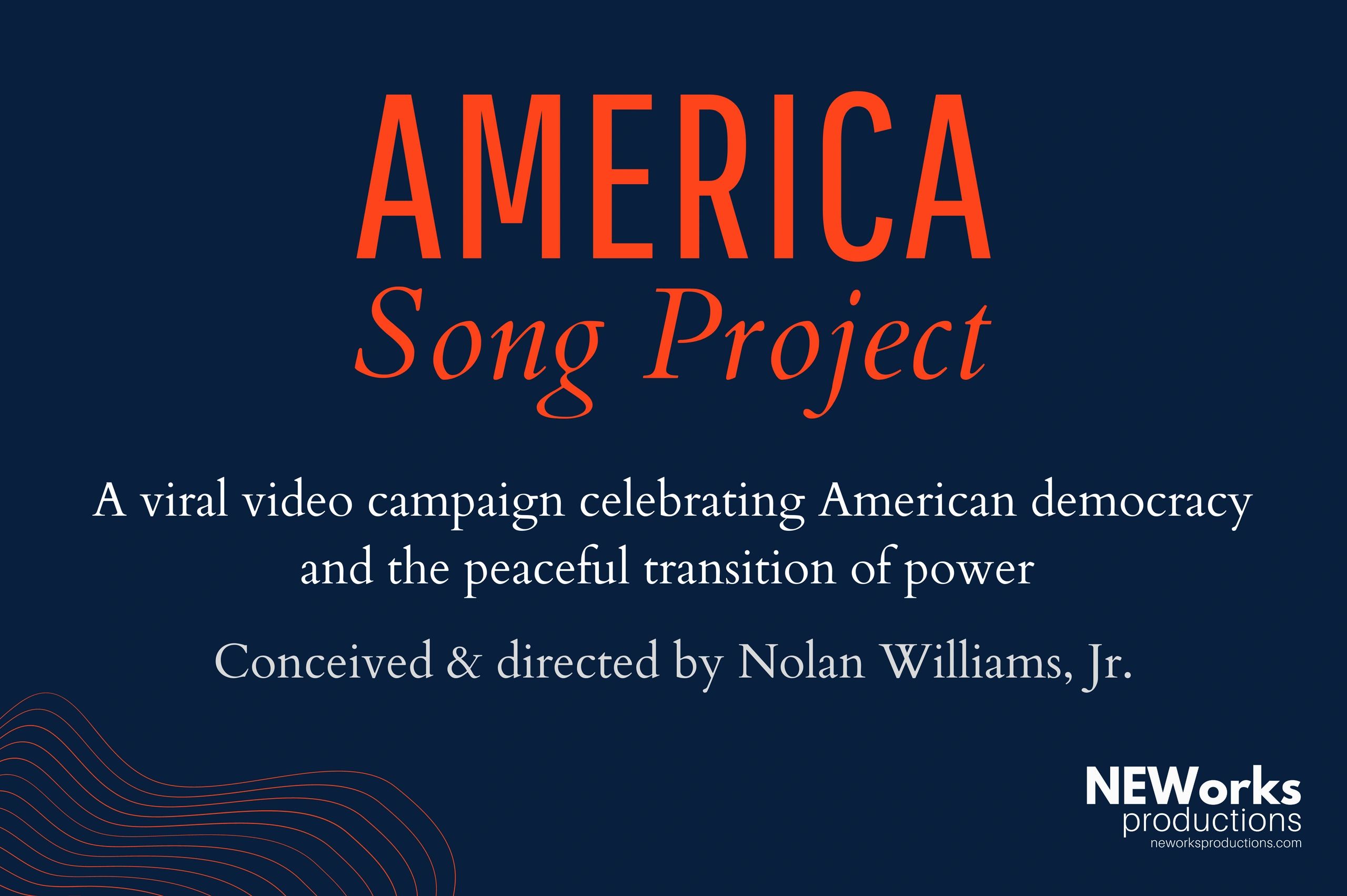 From the composer of 'I HAVE A RIGHT TO VOTE'-OVER 1.2 MILLION views

'America (My Country, 'Tis of Thee)' was penned by Samuel Francis Smith in 1831. Now, this former de facto U.S. national anthem has been revised by American composer Nolan Williams, Jr. to issue a call for national unity following one of the most contentious elections of our lifetime. #UnityAnthemChallenge

'AMERICA' SONG PROJECT IS AN INSPIRING FOLLOW-UP TO WILLIAMS' STAR-STUDDED VOTING RIGHTS ANTHEM, 'I HAVE A RIGHT TO VOTE' [OVER 1,000,000 VIEWS]

I HAVE A RIGHT TO VOTE!

Released during the 2020 election cycle, I Have A Right To Vote is a voting rights anthem and music video that has raised awareness around voter suppression, encouraged voter education and registration, and increased voter motivation, contributing to the record turnout of ballots cast for a national election.

Composed and video directed by Nolan Williams, Jr., I Have A Right To Vote features a stellar cast of celebrities speaking the words of historical voting rights icons, including: Billie Jean King, Billy Porter, Chef Carla Hall, Christopher Jackson (from the original cast of HAMILTON), Hill Harper, Ebony Jo-Ann, and Ryan Jamaal Swain (F/X Network's POSE). The video also features the national touring company of STIRRING THE WATERS ACROSS AMERICA (Williams' theatrical concert production from which the song is drawn), cameos by luminaries like businesswoman Sheila C. Johnson, and American citizens at iconic places across the country—from New York’s Times Square to Milwaukee’s Art Museum, and from the “Rocky” Steps in Philadelphia to the Hollywood sign in Los Angeles—all affirming their right to vote!

I Have A Right To Vote is a non-partisan project. It is not authorized by any candidate or candidate's committee.

"The single most powerful tool in the fight is our right to vote. In spite of everything, we must not squander it, we must get out and vote and inspire others to do the same. I'm thrilled to play a part in this important initiative."

Inspired by the voting rights anthem?

Well, check out our full WOKE! digital arts campaign featuring educational curriculum and an art exhibition that further amplify the themes of voting and human rights!

The official "I Have A Right To Vote" music video was featured in the 2020 Virtual March On Washington Pre-Show on Friday, August 28, 2020.

18 years or older and not registered to vote? It's time to claim your right!

Fill out the form linked below to check or confirm your registration status!

Make the personal pledge to vote this November and encourage all of your family, friends, colleagues, and neighbors to exercise their right!

Check if your friends and family are registered to vote!

Whether it's early voting, voting by mail, or on Election Day, explore your options for healthy voting!

STIRRING THE WATERS ACROSS AMERICA

The song, I Have A Right To Vote, is drawn from theatrical concert production, STIRRING THE WATERS ACROSS AMERICA. Conceived and composed by Nolan Williams, Jr. to illuminate the Civil Rights Movement, STIRRING combines captivating music, spoken word, and dance with stunning visuals to highlight seminal moments from the Movement from 1954 to 1968, connecting the past with the present.

Lauded by D.C. Metro Theatre Arts as “Electrifying. Awakening. …Exquisitely bold and utterly holy,” STIRRING is one of the first works to be developed through The Kennedy Center’s 2019 Social Impact Arts Residency. It was workshopped at The Kennedy Center in the fall of last year.

Paid for by I Have a Right Project. Not authorized by any candidate or candidate's committee.